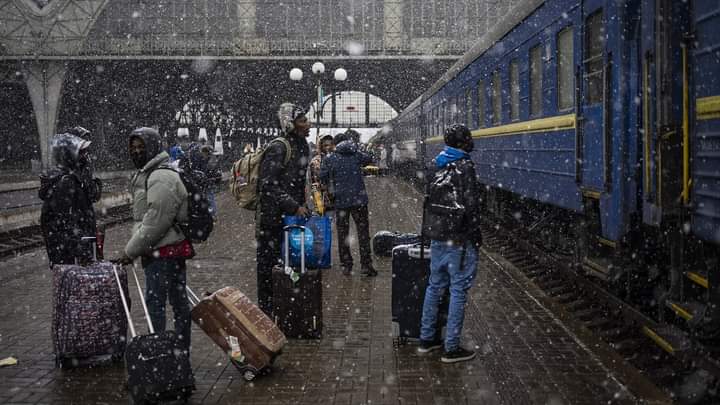 Black and Asian refugees have been subjected to racism while trying to flee Russian attacks in Ukraine. The Nelson Mandela Foundation has issued a statement to weigh in on racism in the war-torn country.

This comes after scores of Black and other people of colour living in Ukraine have been discriminated against and denied assistance when attempting to flee. In some instances, they were forcibly prevented from boarding trains and buses, as priority was given to white Ukrainians. Some of those discriminated against include South African students who took to social media recently to share their experiences.

“The conflict over Ukraine has foregrounded another global fault line: racism. There have been disturbing reports of Black people and people of colour being denied seats in buses evacuating refugees, and being turned away from the Polish border. This illustrates once more a common global phenomenon in which the sufferings of white people in conflict situations habitually receive more attention and care. White lives are seen to matter far more than the lives of others. Racism remains as insidious and ubiquitous as it has ever been,” said a statement issued by The Nelson Mandela Foundation.

“The horrors which have unfolded in recent times in Mali, DRC, Ethiopia, Somalia, South Sudan, Zimbabwe, and Eswatini are often experienced by white people as diminishing the human value of Africans as if white people are of a human order incapable of, and beyond, self-directed atrocity,” the foundation said.

According to the Nelson Mandela Foundation, the conflict in Ukraine has confirmed that European people are neither worse nor better than the rest of humanity.

“Beyond that, Europe may often be seen to be of the disposition that many of the problems its former colonies experience have no historical European origins. The complex historical relationship between the two continents imposes an obligation of mutual respect. If we are ever to achieve solidarity in the global community, we must recognize our shared humanity and defend equally all victims of war and prejudice. All peoples of the world must strive for a just, equitable, and caring global community.”

The Nelson Mandela Foundation has urged the South African government to show leadership and press for a ceasefire. The organisation said the government should participate in rigorous negotiations to map out the future.

” A lesson to be relearned is that whether we are talking about Ukraine or about the many other crises around the world when the rule of law is cast aside and strategies of violence adopted, the resulting misery is far more devastating among weak and vulnerable countries. It is imperative that channels for peacemaking, negotiation, and dialogue be pursued urgently and relentlessly,”  said the foundation.