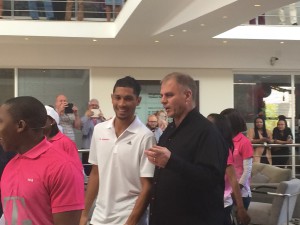 In celebration of his spectacular performance at the 2016 Rio Olympics, T-Systems today present’s athletics superstar Wayde van Niekerk with a R1 million gift.

“It’s our gesture of thanks, honouring Wayde for the way he’s inspired millions of South Africans to believe in their own dreams and chase after success,” notes Mpumi Nhlapo, Head of T-Systems South Africa’s Marketing, Communications, IT Portfolio and Solution Sales.

Wayde powered his way into South African hearts, and into the history books, with the event’s highlight moment. Running in the most difficult lane in the 400 metres final, he won Gold and set a new world record time of 43.03 seconds.

“Wayde’s achievements reflect our vision to change the established rules of how businesses operate. We’re committed to helping our clients achieve success that they never thought were possible – in the same way that the pundits never thought it was possible for someone to smash the world record from lane 8.”

Nhlapo further mentions that Wayde’s success was graciously celebrated by Bayern Munich Football Club who presented him with a signed team jersey in celebration of this significant milestone of Wayde’s journey as an esteemed athlete.

For fans to continue following Wayde as he competes in events around the world, T-Systems recently launched the Wayde’s World portal and social media channels. It features exclusive news, photos and videos from both his athletic and his philanthropic endeavours. In just a few weeks, the Wayde’s World Facebook fan page has attracted over 40 000 fans – testimony to our nation’s pride in the athlete.