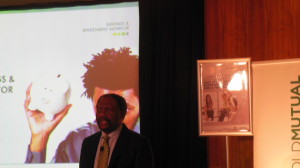 More South Africans are struggling with debt and cutting back on saving towards their childern’s future education, a financial decision that could have devastating consequences for generations to come.
This is one of the key findings of the recent 2013 Old Mutual Savings and Investment Monitor, which surveys the savings and investment behaviour of working metropolitan households.
Raymond Berelowitz, Director of Marketing, Communications, Corporate Affairs and Product Solutions at Old Mutual, said: “The latest findings show that South Africans are increasingly budget conscious and adjusting their spending patterns accordingly. The number of respondents cutting back on expenses has nearly doubled in the last two years, rising to 72% in 2013 from 38% in 2011”.
Of major concern, said Berelowitz, is that the percentage of respondents making use of education policies has decreased dramatically in just a year from 31% in 2012 to 19% in 2013.
Furthermore, he said the percentage of parents with dependent children who are saving for their children’s education has decreased each year for the last four years – from 55% of respondents in 2010 to 40% in 2013. “The 2013 result also makes a significant drop from 2012, when approximately 50% of the respondents with dependent children indicated that they were saving for their children’s education”.
The survey also found that the drop in the incidents of savings for education was apparent across all income levels. These findings are particularly worrisome when coupled with the fact that 38% of respondents had neither a retirement annuity nor a pension or provident fund in place. Almost 40% of respondents said they would rely on their children to take care of them financally in their old age. This figure is up from 26% in 2010. Among people earning less than R6,000 per month, this figure is even higher: 51%.
Berelowitz said the long term impact of this is a perpetual cycle of generational poverty, as breadwinners who are caring for their parents will be hard-pressed to save for their children’s education let alone their own retirement.
The most popular savings vehicles for those that do save are funeral policies(65%), pension or provident funds(56%) and informal savings vehicles such as stokvels (49%) overall, but 65% among black households.
In terms of what people are saving for, the research found that 39% of respondents are saving for emergency expenses, 37% for retirement and 30% for funeral expenses.
Debt is a growing concern: 62% of respondents indicated that they had at least one store card, while 29% said they had at least one credit card. A further 17% of respondents has a personal loan from a financial institution.
The vast majority (55) of respondents who had a credit card pay only the minimum installment each month. Only 13% choose to pay in full at the end of each month. Similar behaviour was revealed with the repayment of store card debts and personal loans. The data shows that an increasing proportion of respondents (72% and 82% respectively), choose to pay only the minimum instalment at the end of the month.
“The longer consumers remain tied to short-term debt and its high interest rates, the longer it will be before they can allocate money to long-term savings that build wealth,” said Berelowitz.
Interestingly, confidence levels in South African financial institutions remain high and are in fact the highest recorded to date. However, Lynette Nicholson points out that overall optimism levels are the lowest measured so far, with only 55% saying they are confident in the South African economy, down from 58% in July 2011.