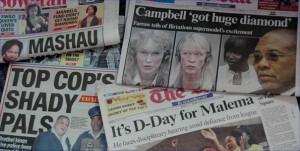 Pretoria – President Jacob Zuma has stressed the importance of diversity and transformation in the country’s media industry, saying ownership should reflect the country’s demographics.

“I am sure we agree that ownership, staffing and content needs to reflect South Africa’s society in all aspects,” he said, adding that the Media Diversity and Development Agency, which reports to the Presidency, was tasked to ensuring the promotion of diversity in the multi-billion rand industry.

Zuma’s meeting with the media owners follows a similar gathering held earlier this year between Deputy President Kgalema Motlanthe and a group of editors from various media houses.

The media was led by Print Media SA chairperson Prakash Desai and chairperson of the National Association of Broadcasters Karen Willenberg, with SABC’s head of news Phil Molefe, and the Gupta family that owns The New Age newspaper was also in attendance.

There has been noticeable tension between government and the media in recent months over the proposed Protection of Information Bill and the mooted Media Tribunal.

But on Friday, Zuma reiterated government’s commitment to the development of free and independent media in the country, adding that a need existed to strive for a media that “is free from political, commercial, factional and other interests.”

He further told his audience that government remained committed to the fight against corruption, which he described as a “key threat” to achieving the country’s objectives. “We are making steady progress as a country in taking forward this fight.”

During the past month, the President had issued no less than 18 proclamations authorising the Special Investigations Unit to conduct investigations within the public sector. Most of the investigations focused on the procurement-related irregularities and conflict of interest cases.

“The anti-corruption task team has also been working with the Department of Cooperative Governance to probe municipalities… there are a whole lot more investigations that are taking place within the public service as we are determine to achieve our goal of clean governance and value for money for our people,” he said.

Zuma also briefed the media top brass on the progress his office has made to respond to the report of Public Protector Thuli Madonsela on the controversial accommodation lease for police headquarters in Pretoria and Durban. Madonsela found both leases to have been unlawful and invalid.

Zuma said: “We welcome the report and thank the Public Protector for her contribution to this ongoing fight against corruption. I asked ministers to respond to the findings and recommendations and they have done so… I will today submit my report to the Speaker of the National Assembly to apprise him of what we have done so far in response to the Public Protector’s report.”

Apart from the Growth Path, other issues discussed during the meeting included the marketing of government and the country, presented by Chabane and International Marketing Council CEO Miller Matola.

The country’s New Growth Path, headed by Minister Patel, sets out an ambitious programme to create jobs, through a series of partnerships between the state and the private sector in areas such as the green economy, expansions in construction and the production of technologies for solar, wind and biofuels.

Clean manufacturing and environmental services are projected to create 300 000 jobs over the next decade. The State says jobs will be created in agriculture through interventions such as addressing the high costs of fertiliser and by up scaling processing and export marketing. It also commits the government to unblocking stalled land transfers, which constrain new investment.