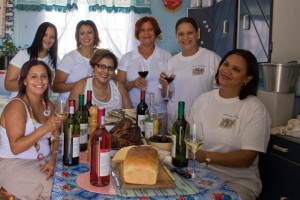 When her father lost his job at a fish-processing factory in the small fishing village of Paternoster, Vivian Kleynhans’ entire family was evicted from the factory house.

With no money and nowhere to go, a life full of pain and hardship ensued for Vivian, her six sisters and their brother. They were forced to split up and live with different relatives to survive.

Twenty years later, the sisters reunited to start African Roots Wines in 2005. The brand Seven Sisters, which consists of carefully selected wines that suit the style and personality of each sister, was born two years later.

Vivian Kleynhans, now managing director of African Roots Wines, had no knowledge of wine-making at the time, and she was particularly wary of venturing into an industry that was responsible for so many social ills in her community.

“Wine was not a love of mine [because] where I grew up we were faced with misbehaviour due to this substance on a daily basis,” she says. “[But], since I entered the wine industry I became unshackled. I learnt about wine and the contexts in which it should be enjoyed.”

Acquiring the knowledge and the necessary skills to compete in the industry was of utmost importance to her, so she enrolled at a wine college, attended numerous wine workshops and completed a wine management course at the University of Stellenbosch’s business school.

“You need to have sound business skills and some wine product knowledge together with this you need to have long breath to start a business in the wine industry,” she adds.

Despite a couple of glitches encountered in getting the business off the ground, in just six years, African Roots Wines has grown tremendously. It boasts a yearly turnover of R1, 8 to R2 million.

Seven Sisters wines can be found at Pick ‘n Pay, Spar and Tops. They export to 42 states in the US and they’re the first wine in South African history to be served on American airlines.

Being new players, competing at global level was crucial, as breaking into the saturated local market proved to be difficult. Locally, cheap wine products made it harder for newcomers to compete, established farmers sold products at ludicrous rates, and shelve space in supermarkets was limited to well-known brands.

“We were seen as potential failures who don’t own land, grapes or have wineries but rely on established farmers who can easily pull the rug from under,” explains Kleynhans.

Read the full article on the print edition of Transform SA.