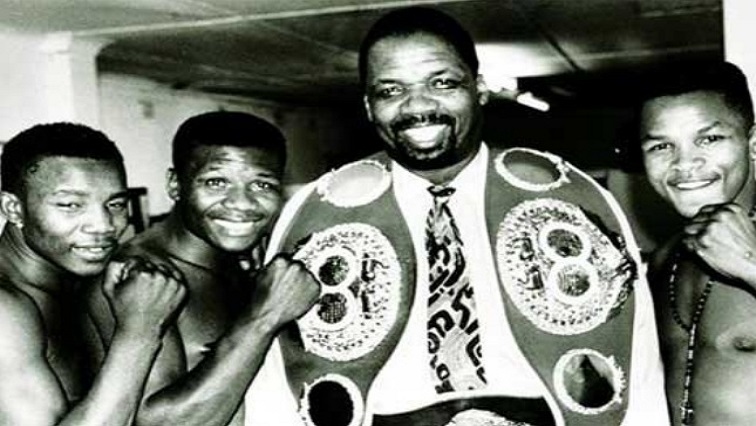 “It is history that Welcome Ncitha became the IBF World Champion in the Super Bantamweight division. Mzimasi Mnguni would go on and guide the boxing career of Vuyani Bungu, Mbulelo Botile and many others like Hawk Makepula. Mzimasi’s feat led to East London become the only place in the world where you find world boxing champions in a radius of a 100 kilometres.”

This morning I woke to the sad news of the passing of Mzimasi Mnguni. Mzimasi was simply known as Bra Mzi in boxing circles. Bra Mzi dominated the boxing scene in South Africa for over two or three decades. The Boxrec records Bra Mzi Mzi taking Mveleli Luzipho under his arm in a fight on June 09, 1984 to a fight in the lightflyweight division against Thamsanqa Sogcwe at the Great Centenary Hall in Port Elizabeth a fight Mveleli Luzipho won. In the same bill Nyingi Mtya was fughting Phumzile Madikane in the superfeatherweight division.  Nyingi also won his bout. Who would forget the epic battles between Mveleli Luzipho and Baby Jake Matlala, both have since passed on. Mveleli lost his South African title to  Baby Jake Matlala, in East London and he through motivation by Mzimasi Mnguni known later as a great motivator of all of his charges as both a trainer,  manager and promoter. The boxing bug might have bitten Mzimasi Mnguni by being influenced by the successful, promoter in East London Boyce Zitumane who guided the fortunes of Happyboy Mgxaji in the 70s. For some reason Mzimasi Mnguni moved to Johannesburg. Legend has it that he became a taxi driver. It happened in the same way  as in the case of Mveleli Luzipho later. Mveleli Luzipho lost his title to Baby Jake Matlala. Mzimasi insisted on a rematch. The rematch was granted and it took place at Orlando stadium in Soweto. With motivation and preparation that Friday night Mveleli Luzipho beat Matlala hands down in his own backyard. Nkosana ‘Happyboy’ Mgxaji lost his South African Junior Lightweight  national title to Anthony ‘Blue Jaguar’ Morodi at home in East London. It meant that for Mgxaji to regain his title he had to challenge Morodi and the fight would be staged at Morodi’s hometown of Soweto at the Jabulani Amphitheatre. Mzimasi might have gone and watched this fight. It is at this epic encounter that Mgxaji pulled out all stops, to win back his title.

Similarly a man who would not give up. Welcome Ncitha, who became the first World Champion from the Eastern Cape, was faced with a daunting task against Kennedy McKinney at Sun City. Welcome who was caught in the fight with what is sometimes referred in the Sport, a Sunday punch and lost the fight. Mzimasi Mnguni would not give up, at the time Vuyani Bungu was Welcome Ncitha’s sparring partner but a world beater in his own right. He would challenge Kennedy McKinney in the United States of America and Vuyani Bungu avenged his homeboy and beat McKinney on points unanimously. And he became the new World Champion and Bra Mzi’s second world champion. His third IBF champion came by chance, the champions title went to pursebids, the purse bids process means that if a boxer does not have a promoters he is associated with or the champion and his promoter cannot agree on terms, then the bid to stage fight is opened to all promoters. This was was the situation with Mbulelo Botile. His was a purse bid case against a British boxer.  Botile stood to have his biggest payday ever. He went over to the UK and beat the boxer to a pulp.

This performance by Mgxaji the darling of Eastern Cape boxing at the time, motivated Mzimasi Mnguni to go back to East London and started training young boxers in a school classroom as there were no real gyms in the township. He formed Eyethu Boxing Club and Mveleli Luzipho was to be his first big name boxer. He would pick up other boxers along the way amongst them Welcome Ncitha, who would go on and become his first World Champion. He teamed up with Johannesburg mega promoter Rodney Berman. Many people are not aware that this was at the height of the Sports boycott against South Africa. A world title had to be planned meticulously, and with the placid approval of the ANC in exile at the time. After conquering every boxer in his division including highly rated Baby Joe Miya in South Africa, Welcome’s was very carefully navigated. A chance for a world title would avail itself against Fabrice Benichou after a tough international encounters against Lincoln Salcedo in Panama City, Juan Rodriquez at the Standard Bank Arena, Jaime Olivera in Orlando Florida, Julio Cesar Cardona in Syracuse in the US, Miguel Pequeno in Crotone in Mexico and Vidal Tellez at the Sun City Superbowl. Fabrice Benichou was the only boxer that in the way of Welcome becoming a World champion. If you go through  Welcome Ncitha’s record you will find he fought all of his fights before the Fabrice Benichou encounter at Flyweight. A match maker Reuben Rasodi told yours truly, that Mzimasi discovered that the champion in this division was too strong and they changed to the Super Bantamweight division. Other complications like the Sport boycott led to the fight being stage in Israel Tel Aviv. It is history that Welcome Ncitha became the IBF World Champion in the Super Bantamweight division. Mzimasi Mnguni would go on and guide the boxing career of Vuyani Bungu, Mbulelo Botile and many others like Hawk Makepula. Mzimasi’s feat led to East London become the only place in the world where you find world boxing champions in a radius of a 100 kilometres.

Dumile Mateza, a revered boxing analyst, pays a glowing tribute to the late Mzimasi Mnguni, who was an effervescent and industrious boxing promoter widely credited for the success of the cream of South Africa’s world boxing champions of the 1990s and early 2000s