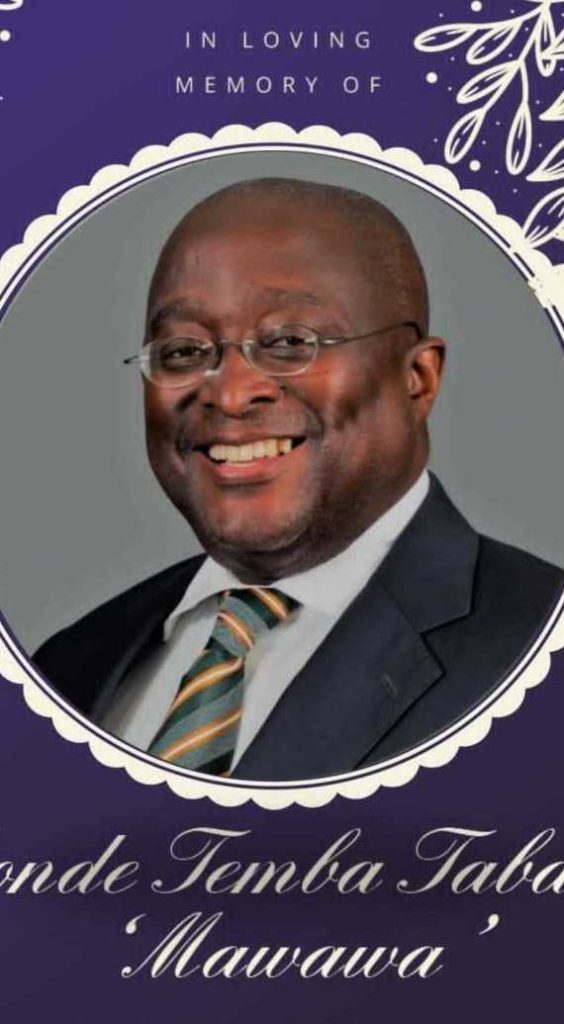 South Africa’s business leaders and friends gathered at Emperor’s palace on Tuesday to honour the life and times of Monde Tabata. He passed away on Thursday 17 September 2020 due to Covid-19 complications. Tabata chaired the finance committee of the SA Rugby Executive Council and held many other roles in business including being the CEO of the National Business Council and Deputy CEO of Megapro Marketing.

The memorial service was organised by one of Tabata’s closest friends and business partner, Peter Mbolekwa. “Monde was extraordinarily strong, we had hoped that he would pull through. If I would pay tribute to Monde I would do a disservice to him because I will spend the whole day just talking about the great things he did in his lifetime,” Mbolekwa said.

He added that he had known Monde Tabata for the past 25 years, “I first met him in 1992. A friend of mine has just reminded me about a day when Monde came over to my house to discuss a business venture back in 1993. We were partners in business aside from being friends. A lot has been said about him, and a lot will still be said. We will miss this giant,” Mbolekwa said.

The memorial service which was also streaming live on various platforms started with a prayer led by Reverend Jabulani Miya of the Anglican church.

A friend, Sipho Skhenjana who has known Tabata for years shared fond memories, “We met 10 years ago in Soweto where Monde was invited as a guest and we have been friends since. I learnt about his passing through a mutual friend and which was later confirmed by his wife.  He had moved to the Eastern Cape and whenever I travel there I would let him know, and he will make time, we will go to his house and we would even go to the beach. I still don’t believe that he is no longer with us,” Skhenjana said.

Another tribute came from Xhanti Lisa who has also known Tabata for many years. “It is very regretful that we are all here. The first time I heard about Monde’s passing was when I woke up early in the morning sometime last week. Then I saw it on TV. I was shocked and it was a rude awakening. Death comes to us all unplanned, and it is always unplanned. As we deliberated with friends about his passing we had to settle with the reality that the man is no more.”

Lisa said Tabata had great attributes. At some point he was Lisa’s lecturer when he did postgraduate studies at Wits University. ” I was told by the dean of the faculty that we were going to have a businessman who was going to give us practical experience about what happens in business. I was not expecting him to come but he came. At that time Monde was someone that I had met several times in social circles. I knew that he had an attribute about sport and business. When he started talking about his business experience the entire class was shocked. He was very young at that time and he was just flowing. After that experience we asked the Dean that this man should come from time to time. We saw him several times and each lecture was quite invigorating.”

“He had an unending posture of moving from up and up and up. Even in difficult times. It shows the character of the man. He became a consultant and advised a lot of people in business. He acquired a property in Centurion where he hosted a lot of people. He was a social human being. We will remember those moments,” Lisa added.

According to Lisa, after Tabata decided to leave Johannesburg for East London he will always be the first person to welcome him and his friends with open arms whenever they travel to East London.  “The last time I saw him was when a mother of a friend of ours turned 94 years old. And that’s when Monde decided to throw a party just to welcome us and that party lasted 2 days.

The pandemic that took his life is a reality of our lives,” said Lisa.

Monde Tabata was clearly a peoples person. Toneka Maja said she met him 36 years ago. “Monde has been a brother, a friend to me and my brother. I met him in Mthata through Zolisa Mnyango. He called all his friends mtshana; and if he calls you that you must know that you’re his friend. We used to hitchhike from Transkei to Bhisho and never worried about where we would sleep. If we had Monde we knew that we would be taken care of,” she recalled.

“In 1995 I relocated to Joburg and Monde was the CEO of the National Business Council. At that time I was running my own recruitment company. He asked me to do recruitment for him,” Maja said.

Business magnate Gaby Magomola who represented the Black Business Council said he met Tabata in 1993. “The early 90s can be characterised as the eve of the highly anticipated democracy that we all yearned for, to be precise it was in 1993 after the NBBC was founded when I got to meet Monde,” Magomola said.

“The stage at the time was set and the casting of the main actors was almost complete. We basically knew we had a government in waiting, and we would be hopefully partners of the leadership who would help us usher in this brand-new government that will represent our dreams. Monde would be one of us bristling with excitement,” he said.

” Monde became one of our young lions that we relied on,” he continued. “A true Africanist and some would describe him as radical. This manifested in his long arguments and his ability to persuade and convince and argue his point.”

The last speaker Mntwabantu Nduvane said: “It is difficult to pay tribute to Monde here as you would recall that Monde was the Executive Director of the company that owns Emperors Palace. I have known Monde for more than 30 years, and I met him through student politics. He was a president of the student representative at Rhodes University.

“If Covid-19 could be defeated through pen and paper Monde could have defeated it,” he said.