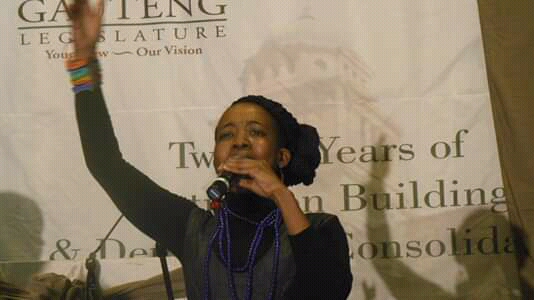 “It’s been rather heartbreaking watching the privileged in the past few days show a lack of empathy for the places they themselves come from,” Ntsiki Mazwai.

While South Africa is on lockdown, social media is not. Over the weekend Twitter users were left divided after poet Ntsiki Mazwai wrote a scathing open letter to President Cyril Ramaphosa.

In the letter she shared her thoughts about the economic impact the 21-day lockdown would have on the poor and accused the president of putting money before his own people.

“You have a tendency to appease the white master at the expense of your people. You will never be able to rationalise why you’re a billionaire in such a poverty-stricken country and we can’t point to anything you have created,” she said in the letter.

Speaking to The Sowetan, Dr Thami Mazwai distanced himself from his daughter. He said he held the government in high esteem and was impressed by their efforts to slow down the spread of COVID-19.

Ntsiki has published yet another scathing letter. Read the letter below:

I do not expect house niggaz to understand me. These past couple of days have shown me that apartheid was successful. In the 90’s the white government created a minority  segment of blacks to give some economy crumbs to. It was to silence them and maintain the status quo. I know this because when I Google my mother the late Belede Camagwini Mazwai who was a leader in the Pan Africanist Congress during the struggle, it is in black an white that my family was part of that buffer created by the apartheid system.

That buffer is working. It’s been rather heartbreaking watching the privileged in the past few days show a lack of empathy for the places they themselves come from. Privilege in the black community is only about 26yrs old. So many of us know EXACTLY where we come from. We can blame the kids born after the 90s but those of us born before the 90s know where we come from, and how life is when you are a Have Not. I think that’s why it’s so hard hitting, because you black elite should know better. Instead you hide behind your high walls and Netflix and enjoy a short holiday while your extended family is facing a wrath in the ghetto. This lockdown gave you a holiday while Africans in the townships and rural areas are having the opposite experience.

The irony of it all is that the black elite are such a tiny minority compared to the black majority. We are not yet uhuru.

So this is what Black Excellence is neh? It separates you from the suffering of your people because you have been allowed into VIP. The black diamonds are reading books and sipping on red wine while their elderly relatives get killed in stampedes because of ill planning of the government. They look the other way and applaud the great work of the government . Kinda like the whites who ‘didn’t know’ what the apartheid government was doing to black people during the struggle years .

The black elite call for the arrests of their own who are being forced to quarantine in shacks and small houses while they call their personal trainers to come gym with them in their big and magnificent yards. So this is black excellence? It is to distance yourself from the suffering of your people because you are benefitting and the presence of a trigger happy army does not affect you.

I just read a comment which triggered this article that said I am self destructing and could be a rising star? What is a star? Being all over your stratcom media covers speaking fluff and nothing political? Is it selling my soul to promote white products as an influencer and endorser of white capital to my people? I forgot what your name is but I saw pics on your Facebook page with you sitting in a golf cart. Because uqabuka izinto zabelungu that is black excellence Mr Strategist? I saw you in your suits and good black swag and trust me when I say, I do NOT expect house niggaz to understand me.

This virus has exposed the stark and shocking difference between the majority poor and minority elite. But the tragedy is it has even exposed the mental slavery we are under. When I suggested that we use Sun City as accommodation for the poor and affected by  this lockdown it was black people who came to the Kerzner defence. This is despite the fact that there are dodgy stories of how Sol Kerzner acquired that land…. And there would be, white people did not arrive in South Africa with land. Why is it that the big corporates are not sacrificing anything…. In fact they are making a KILLING! Why is it that the shop tellers who are dealing with hundreds of people a day haven’t been offered bonuses and medical aid? Why have we sacrificed the people who can’t actually afford this lockdown.

I see the white owned supermarkets where very ready for this lockdown. I see the disruption of the spaza shop economy by the Shoprite trailer’s sudden arrival in the townships.

I learnt that ANC policy says its supposed to favor and have bias toward the poor, and not big business. The way things are looking from my side….

Big business has been the biggest winner.

On a personal note, may I request that the privileged people I grew up around refrain from discrediting me on my social media pages…. Use your own page.

Again… I do not expect house ni**** to understand me.