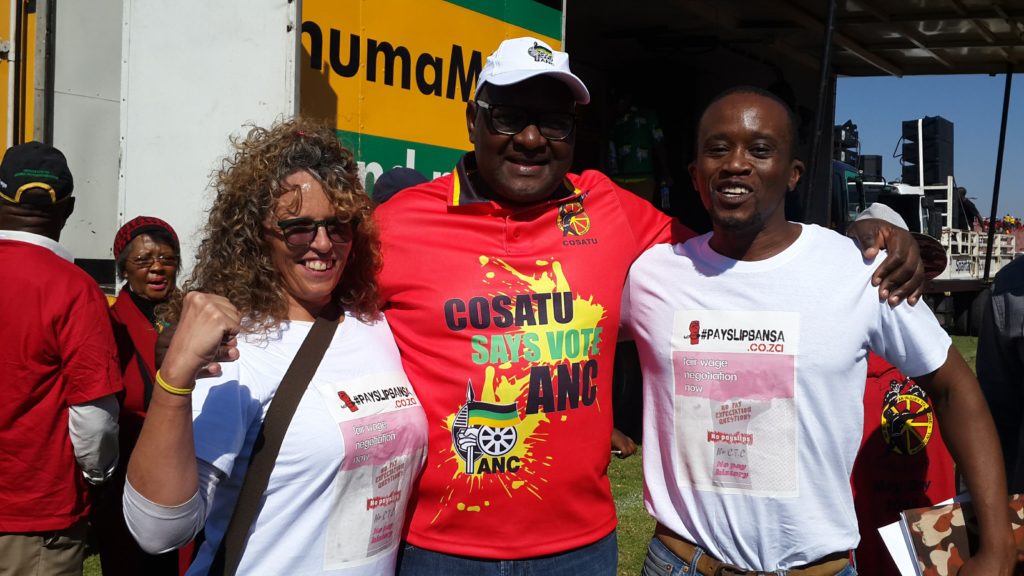 Evidence suggests patterns of unequal pay are initiated in the way a job advert signals the vacancy to job seekers. If job adverts are secretive about pay or contain ambiguous terms such as ‘negotiable’ and ‘market related salary,’ they allude to an iniquitous process.

Indeed, wages are always ‘negotiable’ within a range identified by individual employers, the term is used so the range is undefined. ‘Market related pay’ suggests that employers base an offer on existing unequal wage patterns, thereby perpetuating, not addressing income inequality.

“We want job advertising to be responsible and ethical. No reason to hide pay ranges in adverts can trump the Constitution. Recruiters and employers, usually not qualified in advertising, violate the target markets rights when they create unfair pay information advantages for themselves,” said Vusi Zikalala, PaySlipBanSA Strategy Activist.

Income inequality is no accident. We agree to the wages we earn when we are recruited for a job.

Some employers claim to use pay secrecy as they don’t want rival firms to see their pay. However once applications are received by employers who apply information gaps, candidates are asked about pay expectations and for rival employer pay slips.

Sharing pay slips creates a non-compete environment for talent. If employers, whether overtly or covertly, agree to share such sensitive compensation information, it suggests they are colluding on wages.

Using a rival employers compensation package to base a counter offer on is poaching and unfair. In addition, it discriminates against an applicant who may have been paid unfairly and might now face a limited increase not a competitive wage.

If firms must compete for talent they can’t agree to sharing such detailed compensation information but should have own compensation policies and market research processes in place. Recruitment is not the right to spy and undermine competition.

Henley Africa and Raizcorp agree that pay transparency during recruitment is the right thing to do and commit to the practice. Commissioner Smout from the Commission for Gender Equity states their vacancies will conform to the same transparency and that they are investigating our complaint exposing systemic labour market prejudice.

Internationally, economists analysing labour markets are drawing attention to rising employer monopsony power creating an inequality pandemic. The balance of power required between owners, consumers and workers is disrupted on the basis of unbridled greed.

The term ‘labour market’ is completely absent from the Competition Commission’s recent Health Market report and only refers to ‘workers’ 4 times. Yet this sectoral analysis is meant to determine policy and regulatory responses to market constructs. The fact that dominant employers are openly failing to compete for talent and appear to collude and price-fix wages appears to be completely overlooked.

Commissioner Bonakele at the Competition Commission states confusion about how Competition Law can impact poverty and inequality, and prevents Pay Slip Ban SA from providing evidence.

The Commission is itself guilty of Constitution and Competition Act infractions when forcing job applicants to declare rival employer cost to company.

The Competition Commission conduct, out of sync with their mandate, could learn new nomenclature from the Warren Plan which eloquently addresses labour market competition and  curtailment of destructive employer power through regulations.

Although the global economy grows, wages aren’t rising, they stagnate or become more unequal. What’s fair about that and why would women want to be equal amidst such inequality?

When the process of negotiating pay is transparent, offers will become fair. When recruitment practice is fair, it will be easier to drive wage equality. If rival employer pay slips continue to be shared and wages unfairly price-fixed, the labour market will continue to be unfair and biased in favour of employer monopsony power.

We Can Change This:

Pay Slip Ban SA is challenging employers to commit to transparency during recruitment in order to break patterns of unequal pay.

Pay Slip Ban SA runs a campaign encouraging job seekers to forward email requests for pay slips from employers and recruiters. This allows explicit evidence, never before collected from the public, to be documented and meaningfully compiled.

We want to take action against firms who request payslips. We believe they abuse power and obstruct job seekers right to pursue better economic opportunity.

We Advocate and Litigate

The public is encouraged to sign the petition and sponsor litigation for change. Listen to the podcast with Advocate Lunga Siya here.

One thought on “Nonprofit Launches a Manifesto to Address Income Inequality”