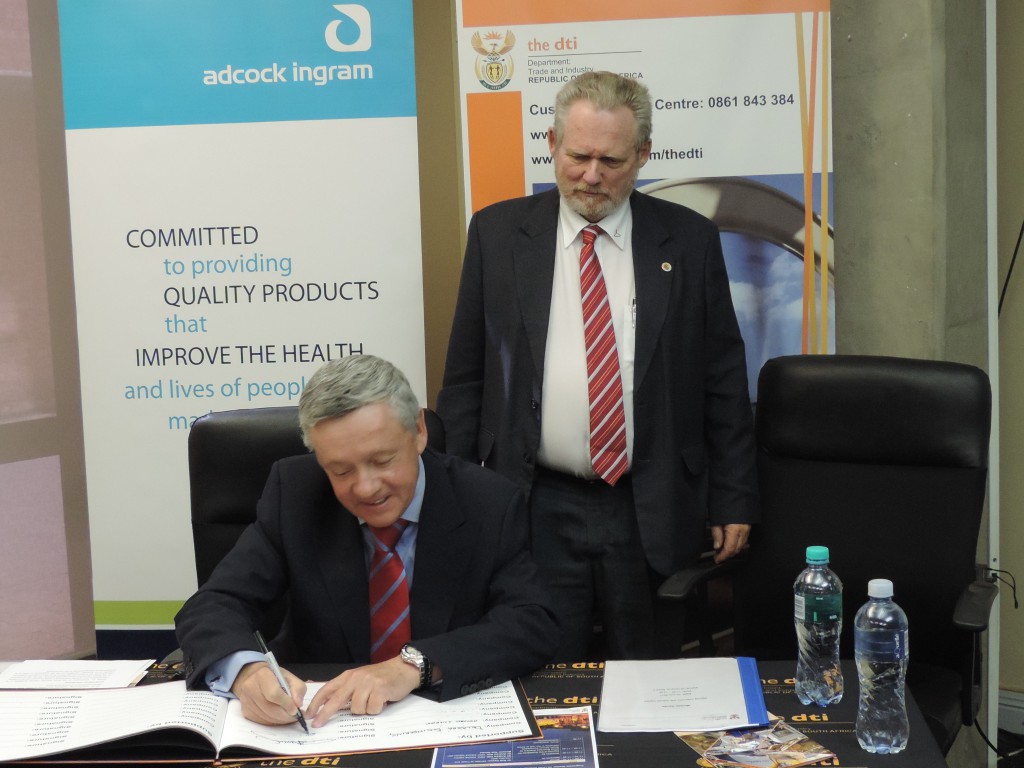 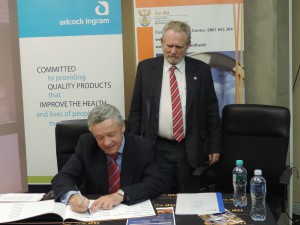 The CEO of leading South African pharmaceutical manufacturer Adcock Ingram, Mr Andrew Hall, recently signed the Guidelines for Good Business Practice by South African Companies Operating in the Rest of Africa. The signing ceremony, which was witnessed by the Minister of Trade and Industry, Dr Rob Davies, took place at the dti Campus in Pretoria.

The guidelines are an initiative of the Department of Trade and Industry (the dti). They were developed in consultation with other related government departments, private sector and labour organisations. The guidelines are a voluntary set of principles and standards that aim to promote responsible business conduct. They provide a guiding framework for South African companies, as active members of the continental business community, to promote sustainable economic development in Africa in accordance with the continent’s socio-economic developmental imperatives.

The guidelines were approved by Cabinet in September 2015 and launched by Minister Davies in Pretoria in July last year.

Adcock Ingram manufactures, markets and distributes a wide range of healthcare products. It trades in, or exports to over 13 markets on the African continent including Kenya, Zimbabwe and Ghana. Mr Hall said he was delighted to sign Adcock Ingram’s commitment to the Good Business Practice, as it is a reflection of the way the company does business in South Africa and in the 13 African countries to which it exports, or in which it has local infrastructural presence.

“Signing our commitment to the Good Business Practice Guidelines is an enhancement of our existing commitment to doing business in the rest of Africa, at the highest standard of ethical business practice. The signing also reflects our commitment to providing quality products that improve the health and lives of people in the markets we serve, while operating responsibly and ethically,” said Hall.

He added that he was also delighted to confirm Adcock Ingram’s ongoing commitment to expanding its established investment in South Africa, which has benefits for both for the export markets they serve and enhances the company’s ability to protect and expand jobs in the local manufacturing environment. Minister Davies expressed the dti’s gratitude for the leadership of Adcock Ingram in demonstrating its support for this initiative and the role of corporate governance in promoting the sustainable development of the continent as a whole.

“the dti looks forward to fostering enhanced collaboration with Adcock Ingram in strengthening its presence and impact on the continent. In line with South Africa’s and the continent’s developmental integration ambitions, the guidelines represent a proactive initiative by our government to promote responsible business practice and good corporate governance by the South African private sector in their business engagements on the continent,” said Minister Davies.

He added that the signing confirmed the importance attached by both government and Adcock Ingram to supporting the development integration efforts of the continent, as well as to improve South Africa’s presence and reputation on the continent.

A total of 54 companies, including Vodacom, PPC, Tongaat Hulett, Foschini Group and Bidmark Holdings, have signed the guidelines since their launch.