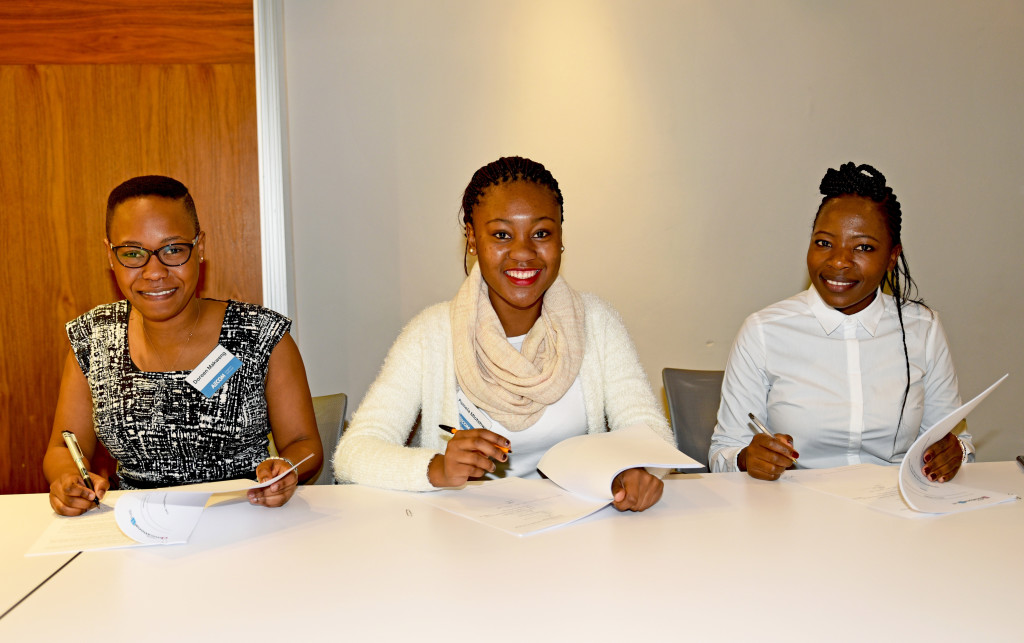 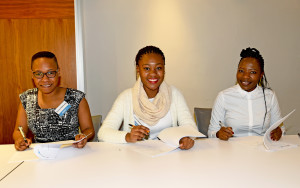 Speaking at an official ceremony at AECOM’s Sandton head office on 29 June, Marketing and Communications Director Rashree Maharaj commented that the Educational Trust had been a long time coming. “We are really excited that it has finally gotten off the ground,” she added. Maharaj is a trustee, along with Human Resources Director for Africa Senika Devsheel, and Bowmans Attorney Gomolemo Kekesi.

The three members of the AECOM Educational Trust had looked at numerous CVs and conducted extensive interviews. Following the receipt of about 50 bursary applications, the three successful recipients were Doreen Legasa Makweng, Nontuthuzelo Pamela Mlotshwa, and Tshlidzi Bridget Lutsinge.

“We are very comfortable that the three students selected are not just smart, all having performed above average in their respective fields of study, but that they are truly empowered women and go-getters,” Maharaj explained.

Kekesi oversaw the necessary legal process. She explained that, instead of a purely equity-based B-BBEE deal with a qualifying party, AECOM Chief Executive for Africa Carlos Poñe had a vision for an education trust that would add to the company’s empowerment credentials, while simultaneously empowering young black women.

“South Africa needs more women to join professions that have been closed to them historically. While a lot of girls do phenomenally well in maths, science, and languages at school, there seems to be a fundamental disconnect between lower levels of schooling and the tertiary/professional levels, as you do not see nearly enough women fill the roles they should be aiming for. This is due to obvious historic and social reasons, and the AECOM Educational Trust is one way of addressing this issue proactively,” Kekesi pointed out.

Makweng, an Honours student in Industrial Systems at the University of Pretoria, said she was “humbled” at being selected as a recipient, as the bursary made it possible for her to focus on her MA studies next year. She had selected engineering as a subject as it combined science and technology to help improve quality of life for all. “My success as a woman shows that it is not impossible, as long as you apply yourself and work hard.”

Mlotshwa, a first-year Mining Engineering student at the University of the Witwatersrand, said that mining interested her as commodities were the building blocks of everything from smartphones to buildings. “The AECOM Educational Trust has allowed me to achieve a dream that is generally out of the reach for a child from a public school in an informal settlement. My aim is to make my mark on the mining industry as a woman, and to be respected as a result.”

Lutsinge, an MA student in Water Utilisation under the Faculty of Chemical Engineering at the University of Pretoria, explained that the bursary had removed the financial burden of worrying about how to pay for her studies, basic necessities, and accommodation. “There are a lot of opportunities available if you study hard.” She highlighted that her field of study is critical in finding long-term solutions in a water-stressed country like South Africa.

Mlotshwa added: “There is a dearth of role models in townships for young learners to look up to and to expand their educational horizons. Often they do not think beyond the traditional career paths of nurses and teachers, as they have no exposure to other vocations. I would also say to prospective students to focus on what they are passionate about, instead of just opting for the highest remuneration, as your job is your life.”

The three recipients of the inaugural AECOM Educational Trust demonstrate that, while the professional entry barriers are different for men and women, the latter not only have to work hard, but have to have perseverance and tenacity, in addition to exceptional commitment and self-discipline. “Women also have to perform at a default level higher than that of men, in order to defy preconceptions about women in the workplace,” Kekesi stressed.

She concluded that the guiding principle in her life and career has been to not let her desires and goals be dictated by her circumstances. “Whatever the barrier, I will break it down. It is hard, and sometimes you do become discouraged. Sometimes you second-guess yourself, and think you cannot do it. What we have demonstrated is that our ultimate worth is not determined by what other people think, or as dictated by the prevailing situation. You simply define your goals, and set out to achieve them, which is what the AECOM Educational Trust is all about.”