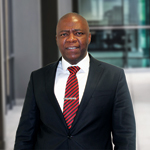 The board of Group Five announces that group executive committee (“exco”) member and the head of Developments, Themba Mosai, has been appointed as the group’s interim CEO.Mr Motsai has been with Group Five for almost 13 years and has been an active and strategic member of exco since 2014,according to a statement on the Johannesburg Stock Exchange (JSE) SENS service.

Group Five said under Motsai’s leadership, the Developments business has focused on identifying and developing significant contract opportunities in line with the group’s strategy in target sectors. Prior to joining Group Five, Motsai worked for AngloGold Ashanti in various mines in South Africa and Lebone Consulting Engineers in various roles, including that of project manager.

At Group Five, he has also made great strides in further enhancing the group’s position across target African geographies and its profile with both public and private sector clients, as well as securing new work and resolving legacy matters in key markets.

The newly appointed interim CEO has worked closely with all exco members and has a firm understanding of the complexities of the markets and the current challenges the group has to address. The Group Five board has initiated processes for the appointment of a permanent CEO which include the assessment of both internal and external potential candidates. The board of directors also welcomed the well experienced executive to his new role and said it is pleased to be able to reiterate the group’s commitment to continue driving internal succession plans and as well as transformation within the organisation.