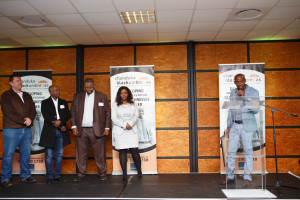 Tenacious and entrepreneurial to the core, Tommy Maboe hails from the small Northwest mining town of Bopong. Since matriculating from Mogale High School in 2001 he has worked relentlessly to get to where he is today – the owner of Phakwe Mining Services, employing 290 people and generating overR3o million rand in annual turnover.

In the sweep of a decade, Maboe has persistently progressed, steadfast to his ambitions, starting as a Lonmin Stope worker to becoming a fully-fledged business owner.

Through his tenure at Lonmin, which began in 2006 until his resignation in 2010, Maboe identified opportunities within the mining sector that he had come to know well and shifted gear from employee to entrepreneur, a decision that would not only change his life, but catalyse an avenue to employment for hundreds of South Africans in turn.

Phakwe Mining Services provides underground cleaning, hauling, maintenance and vamping to Lonmin, amongst others. Like every successful business person however, he has not gone it alone. Beyond his commitment and endurance, there have been other people instrumental to his business’s success.

Every entrepreneur knows that starting a company, and keeping it sustainable, is a long and arduous road. That is why Maboe sought a partnership with Shanduka Black Umbrellas (SBU), particularly the Mooinooi incubator (funded by Lonmin) in August 2013, to acquire the mentorship, training and business support to take his business to the next level of evolution.

With his years of accumulated knowledge and experience, his business nous, and the continued support of Shanduka Black Umbrellas’ Enterprise & Supplier Development platforms, Phakwe Mining Services will continue to grow from a start-up SMME to a considerable business in its own right.

Incubator Manager for the Mooinooi SBU, Precious Tshabalala, says,“This is indeed a great and successful achievement and we are very proud to have Tommy Maboe as one of our successful business clients.Tommy is a young, dedicated and truly inspirational entrepreneur who has created many jobs for the previously disadvantaged communities of the Bapong and the Greater Lonmin communities.”

Beset by socio-economic difficulties, rising unemployment and the regional impact of the protracted platinum sector strikes, every opportunity to address these challenges through meaningful and sustainable job creation is vital for the area.

Says Maboe: “In the one and a half years that I have been incubated through the Mooinooi incubator I can tell you that the response of the local community has been unbelievable. That place is in the right space doing what it can do with the resources available.”

Whilst Tommy Maboe’s story is one that really stands out, other companies have similarly benefited from the SBU/Lonmin partnership including Are Direng Garden Services, Planet Electrical and Etirile Construction.

According to Lerato Molebatsi, Lonmin’s Executive VP for Communications, this is the big picture.

Says Molebatsi: “The relationship between Lonmin and SBU is premised on ensuring that emerging entrepreneurs are assisted through the SBU incubation programme aimed at creating sustainable businesses. We as Lonmin formed the partnership with SBUin September 2013 and since then a substantial number of businesses have been invited and/or accepted onto the programme.

“The whole point for Lonmin in terms of enterprise development is to have a programme for supplier development so that our own suppliers understand the process of supply chain procurement, in conjunction with Shanduka Black Umbrellas,” says Molebatsi.

Shanduka Black Umbrellas operates eight incubators across the country, providing enterprise and supplierdevelopment support to 100% black owned businesses to gain a foothold and traction as emerging businesses. Through the incubators, the SMMEs, referred to as “clients”, receive office space, assistance with bookkeeping and compliance requirements, mentoring and assistance with access to procurement, networks and financing.

SBU has helped create and preserve over 4000 jobs in the past five years, and is constantly expanding its reach to create meaningful economic growth through partnered empowerment.  As recognition of its achievements to date, SBU has been awarded the coveted Randall M. Whaley Incubator of the Year award by the National Business Incubation Association (NBIA). The NBIA, an international thought leader and global advocate for incubators and accelerators, honoured SBU with the accolade at the 29th National Business Incubation Association awards ceremony, held in Denver, Colorado (USA).