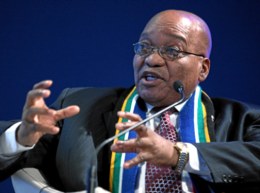 This is according to President Jacob Zuma, who was addressing the opening session of the 12th International Labour Organisation African regional meeting in Sandton on Tuesday.

Zuma told delegates from African states, business and labour that it was only through working together that Africa would be able to empower its people and eradicate poverty.

“Governments have to play a critical role in promoting decent work in Africa by setting up appropriate development policies and ensuring regional and continental economic cooperation in ways that promote jobs,” said Zuma.

But for it to work, governments must make employment the main priority, in addition to complementary initiatives.

The President mapped out these initiatives which include supporting the informal sector and providing bridging programmes between the informal and formal sectors, moving towards improved social security for the African peoples and paying attention to education and skills development.

While African economies have not been as severely affected by the global financial and economic crisis, data shows that Africa has failed to create jobs. The International Monetary Fund estimates growth for the region at 5.2 percent for 2011.

According the United Nations report released in 2010 dealing with the attainment of the Millennium Development Goals (MDGs), Africa will have to create 100 million productive jobs in order to reduce the number of the working poor.

He mentioned the need for a more efficient growth and employment strategy that does not measure success by growth alone, and that priority to SMEs and productive investments in the real economy needed to be promoted.

Somavia warned that a return to austerity was not a sustainable policy answer. A balance needed to be struck between polices that create jobs, produce real growth and demand, maintain basic social protection, and generate fiscal income that will allow debt to be repaid.

“Ultimately, we need to put productive investment in job-generating sustainable enterprises in the driver’s seat of the global economy,” he said.

He added that the financial system must concentrate on providing resources needed for innovation, investment trade and consumption and not on “casino options in short or long selling and obscure financial products.

“There is too much concentration on how to give confidence to financial operators and too little on how to retain the trust of citizens,” explained Somavia.

The gathering, which ends on Friday, is taking place under the theme ‘Empowering Africa’s People with Decent Work.’ It is being attended by several delegates including Labour Minister Mildred Oliphant, who told the summit that economic recovery could not be sufficient until there was employment recovery.

“Financial and social stability must come together. Otherwise, not only will the global economy but also social cohesion will be at risk,” Oliphant said.

Zuma used the platform to highlight that in South Africa, progress was being made in creating enabling conditions to promote job creation.

He said government had identified that the central and most pressing challenges were “unemployment, poverty and inequality.”

To deal with the three challenges, South Africa had to accelerate economic growth and transform the quality of that growth.

“Our policy spells out clearly that our most effective weapon in our campaign against poverty is the creation of decent work, and creating work requires faster economic growth,” Zuma told the congress.

He said government was trying to stimulate growth and create jobs through the New Growth Path framework, which aims to create more than five million jobs by the year 2020.

There were also plans to strengthening competitiveness and promote small and medium-sized enterprises and co-operatives, in addition to the localisation of procurement policies, which he said was also yielding results.