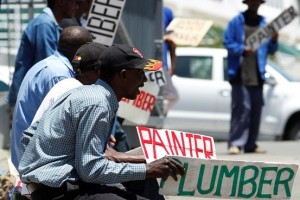 Johannesburg – President Jacob Zuma has told a Cosatu meeting underway that government was concerned about the growing unemployment in South Africa vowing his administration will work “faster” to build the type of economy that will enable South Africa to eradicate poverty, unemployment and inequality.

He addressed the first day of trade union federation Cosatu’s central committee meeting attended by more than 500 delegates in Midrand on Monday. The meeting is the largest gathering of the federation between conferences.

While acknowledging the challenge of unemployment especially among the youth, Zuma said government had made in-roads to address the problem since the world came out of economic recession that had seen nearly one million South Africans losing their jobs.

“As the National Planning Commission diagnostic report among others indicates, the poor are still marginalised and inadequate infrastructure delays social inclusion and economic growth,” Zuma said in reference to the document published by National Planning Minister Trevor Manual earlier this month.

“In essence the lot of working class is yet to improve further and in a more meaningful way as we also acknowledged at the April job summit with labour and government, we therefore have to work steadily at rebuilding our economic base and explore new opportunities,” he said.

Government also wanted an economy that would allow all South Africans to realise their right to an environment that was not harmful to their wealth and wellbeing.

Also speaking at conference earlier, Cosatu President Sdumo Dlamini said the federation was concerned about the growing unemployment figures in the country calling on the state to further strengthen its intervention to address the challenge.

“We are worried that more than one million people lost their jobs between 2009 and 2010 in our country and as a result of this perpetual job loses our people continue to be faced by poverty,” he said, adding that it was the youth who continued to form the majority of the unemployed.

But Zuma told the delegates that the jobs fund released recently by Finance Minister Pravin Gordhan will aim to operate as a catalyst for innovation saying its activities will directly contribute to job opportunities for the country’s unemployed.

“It will provide the much needed entrepreneurship and skills for our economy. We are also re-industrialising the economy, particularly the manufacturing sector, emphasising research, innovation and skills development.”

Small businesses were being merged and tax breaks provided to companies wishing to invest while protecting local industry at the same time. Government also plans to use the more than R800 billion massive infrastructure programme in the next three years to broaden job opportunities for the unemployed youth.

In addition, Zuma said, government was confident in meeting the target of creating 300 000 jobs in the green economy over the next decade through green initiatives that aimed at reducing South Africa’s carbon footprint and the impact of climate change.

These issues were expected to take centre stage as South Africa prepared to host the 17th Congress of Parties on climate (COP17) in Durban later this year.

On Monday, Zuma went on to say that government will also use the new growth path framework for the country to address poverty and create decent work. Cosatu had welcomed the policy whose implementation Damini said the federation had been fighting for, for many years.